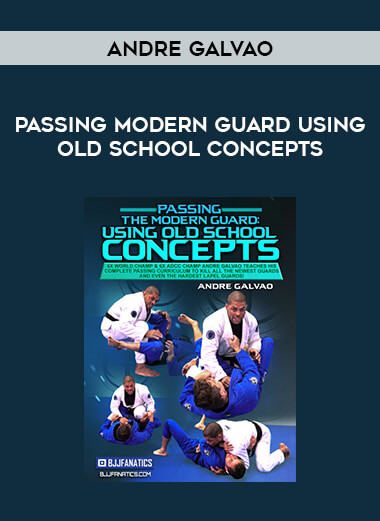 Never Worry About The Lapel, Berimbolo, Or Inverted Guard Again With This Blueprint For Passing Modern Guards

Andre Galvao Teaches The Passing Principles Anyone Can Use To Shut Down The Modern Guard Player – The Same Moves He Teaches His Atos Fighters
Master the modern guards and pass with pressure and mobility, with this new 8-volume mega release from Andre Galvao
Andre Galvao is one of the best Brazilian Jiu-Jitsu competitors ever, a six time world champion in the IBJJF, and the reigning ADCC Superfight Champion
Find the most effective solutions to beating these modern guards with the man who has spent more time than anyone else studying them, Andre Galvao
In addition to those stubborn lapel positions, also learn how anyone can dominate with positioning and pass through fast and flexible opponents without letting them invert and make life so hard

Downloadable videos – YES! You can download this course and watch it on your favorite devices. Designed For All Level – Whether you’re a beginner or an advanced fighter, this course will change your game. Invest in your BJJ game – This is just like a private seminar. Skills you learn here will last a life time. 100% Satisfaction Guarantee – If you don’t find this course helpful, we’ll give you a full refund with no questions asked.

Side Control Concepts When Opponent Turns Away

Side Smash against Lapel Lasso