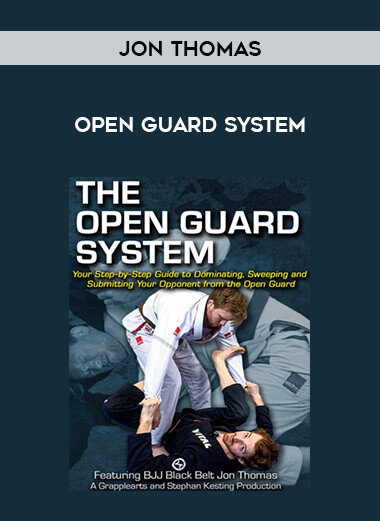 What Exactly Are You Getting in The Open Guard System?

The Collar Sleeve Guard from The Open Guard System with Jon Thomas
In this volume you’ll learn how to get to and attack from the powerful double sleeve grip.
The double sleeve grip is probably the most versatile of the open guard positions. It works against standing, squatting and kneeling opponents, and you can get to it anytime your opponent leads with his hands.
Learn the details of double sleeve and you’ll always have a great starting point and super-strong foundation to build your open guard game.

Volume 2, The Collar Sleeve System
In volume 2 we go deep into collar sleeve series, which is another very powerful way to attack from the open guard.
You’ll learn exactly how to use the collar sleeve as a hub position to launch attack after attack. You’ll have an effective answer for everything your opponent your opponent throws at you.
You may have seen individual techniques from this position before but never connected together with such a comprehensive, step-by-step strategy to guide you.

Volume 3, The de la Riva System
de la Riva Guard from The Open Guard System with Jon Thomas
Knowing how to build an effective game from a single ankle control grip (or the ‘de la Riva’ grip) is super important, especially if your opponent is trying to pass your guard standing up.
If you can’t effectively control your opponent then you’ll forever be stuck in defense. That’s why in volume 3 you’ll get all the specific skills you need to start with a single grip on his ankle ankle control and systematically progress towards some of the most powerful attacks in jiu-jitsu.
Here’s some of what you’ll learn in volume 3…

Volume 4, Gripfighting
The Far Side Collar Sleeve from The Open Guard System with Jon Thomas
Gripfighting is the key to setting up your own game while at the same time frustrating the hell out of your opponent
You’ll learn different effective strategies for winning the initial grip battle when you and your opponent first square off, as well as procedures for shutting down your opponent’s attempts to control your legs and pass your guard when you’ve got him in the open guard.
Dominate the grip and you’ll dominate the match!

Volume 5, Guard Retention
Guard Retention Sparring from The Open Guard System with Jon Thomas
Guard retention is the art and science of shutting down your opponent’s guard pass attempts so that you can keep him safely in the guard and not get crushed under his full weight in a pin.
A lot of practitioners use instinctive guard retention by trying to wildly flail their legs back into position. This is both exhausting and inefficient; there are much better, technically grounded ways to shut down the guard pass!
In volume 5 Jon Thomas shares the exact techniques and concepts that have made his open guard so difficult to pass.

$96.00
Compare
Add to wishlist
Start typing to see products you are looking for.