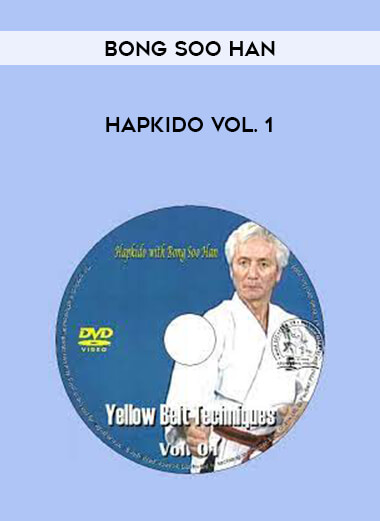 *HDA Approved*Note: The video “Hapkido – Red Belt” (not Red Belt First Stripe) is FAULTY.
Also, there is no DVD 11 in this, “20th Anniversary Demo and Interview”, which is more of a general theme than an instructional video anyway.
Sometimes the videos (except for the faulty Red Belt video) may seem to “freeze” or they’re silent for several seconds; this is normal and it’s as intended however, as you will see if you rewind or forward around half to a minute.
BiographyGrand Master Bong Soo Han was the world’s foremost practitioner of Hapkido and he is referred to as the Father of Hapkido in the Western World.
As one of the original senior students of the Founder of Hapkido, Yong Sul Choi, he led a dedicated effort in the development of Hapkido as it is known today.
He taught thousands of loyal students throughout his life with many becoming masters themselves.
Other masters across all styles have sought out his wisdom and teachings.
Grand Master Han studied and refined this powerful Korean martial art for more than 60 years.
Up to the time of his death, he held the rank of 9th Dan Black Belt.
He founded and presided over the International Hapkido Federation.
DescriptionThe father of Hapkido in America, Master Bong Soo Han instructs in this 11 vol set on the Korean art of Hapkido.
Includes:
Vol 1: Yellow Belt Techniques: -Hapkido warm ups, stretching, and conditioning exercises, basic kicks, blocks, punches and self defense techniques against multiple opponents.
Vol 2: Orange Belt Techniques: – Hapkido falling techniques, basic kicking combinations, step back kicks, Hapkido self defense techniques against punching ttacks and wrist holds.
Vol 3: Purple Belt Techniques: – This valuable lesson teaches single blocks against kicks, self defense combinations against front, side, and roundhouse kicks, plus Hapkido escapes and counter strikes against wrist grabs.
Vol 4: Green Belt Techniques: – In this lesson, you will learn rear and forward leg jumping front, side, and roundhouse kicks, followed by dynamic Hapkido self defense techniques against one and two handed wrist holds.
Vol 5: Blue Belt Techniques: – Includes 6 blue belt kicking combinations, 8 dynamic Hapkido throwing techniques, and numerous Hapkido self defense combinations against sleeve, lapel, collar and shoulder grabs.
Vol 6: Brown Belt Techniques: – Teaches nine dynamic kicking combinations, plus advanced Hapkido self defense against various garment holds.
Vol 7: Brown Belt 1st Stripe: – You will learn advanced brown belt kicking combinations, Hapkido advanced self defense techniques against rear, wrist, collar, shoulder and sleeve holds.
Vol 8: Red Belt Techniques: -Teaches red belt spinning and jump kick combinations plus 14 devastating Hapkido self defense techniques against front, side, and rear choke attacks.
Vol 9: Red Belt Techniques 1st Stripe: -11 highly advanced spinning, jumping, and flying kicks, plus advanced self defense throws, sweeps, and take downs against punching attacks.
Vol 10: -Black Belt Techniques: Black belt drop sweep spinning roundhouse and heel kicks, plus over 20 highly advanced Hapkido take downs, sweeps, and throws against front, side, and roundhouse kicks.
Vol 11: -20th Anniversary Demo and Interview: This dynamic ivideo features an exciting 1995 Hapkido demonstration presented by Bong Soo Han’s students in honor of his Santa Monica, CA school’s 20th anniversary.
This show presents all of the exciting aspects of Hapkido, the Korean martial art of “Coordinating Power”.
Also included is a very rare and exclusive interview with Grandmaster Bong Soo Han – the father of Hapkido.