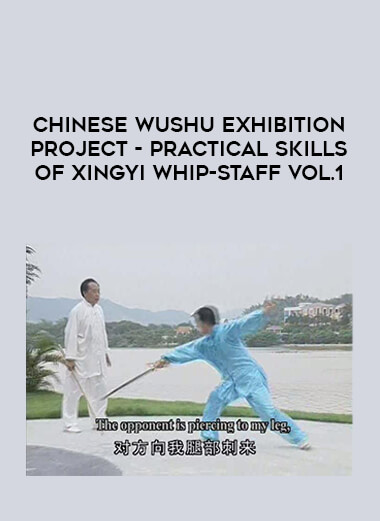 Traditional Shan Xi style Xing Yi Quan Series DVD/DVDsThere are three main styles of Xing Yi Quan being practised today – the Henan style, the Hebei style, and the Shan Xi style.
The Shan Xi style has been recognized as the original style and one which keeps its vigorous and powerful energy releases inside its movements.
This series is part of the Chinese Wushu Exhibition Project Series DVDs, demonstrated and explained by Zhang Zigui, one of the top 100 Martial Arts Masters in present China.
The famous martial artist Wu Shi Jun presents the demonstration.

1.Practical Skills of Xingyi Whip-staff (SXYD01) – 50 min.
Whip-staff is also called short staff.
It is popular in Shanxi and in the northwest area of China.
The length is about 1.2 meters.It is short and bladeless, and the end and handle should be used.
Change to use as one and two hands, it absorbs the methods of long and short weapons and develops its unique style.
The main points are attacking or defending by taking advantage of an opportunity, and weapon and body move in harmony.

3.Practical Technique of Hunyuan Xingyi Quan (SXYD04) – 50 min.
In need of the competition and the spreading, in order to inherit and develop the traditional content of Xingyi Quan, comes the integrated Xingyi Quan Routine with unusual characteristic on the basis of absorbing, spreading and improving.
There are 48 movements in this set.
It contains the main movements of five-element, twelve-style Quan and some other techniques developed from them.
The routine is divided into 5 sections.
It is a nice route for performance and competition.

5.Practical Combat Skills of Continuous Quan (SXYD06) – 48 min.
Continuous Quan is one of the traditional routines of Xingyi Quan.
It’s based on the theory of Five-elements, with a short and tightened frame, but powerful.
It features stepping forward or backward without a start or end, but they are linked up.

6.Practical Combat Skills of Mixture styles Quan (SXYD07) – 50 min.
Mixtures styles Quan is the mixture styles combined rehearse of traditional Xingyi Quan.
It looks gorgeous, but simple to use, spectacular, quadrate up and down, including everything, moving a lot but smart, changeable in posture and linked up.
It is the routine of traditional Xingyi Quan which contains many techniques and needs many circles.

7.Rules of Chinese Wushu Tuishou Competition (SXYD08) – 54 min.
On the base of Taiji Tuishou, Wushu Tuishou is a kind of civilized athleticisms, in which the competitors make efforts to have the opponent fall down to the ground due to loss of balance.
On the principles of Touch, Join, Stick, Follow, and “no hit with separated hand,” t he competitors utilize the hand techniques, such as Lv (roll back), Ji (squeeze), An (press), Cuo (scrub), Dai (lead), and the leg techniques, such as Bie (clip), Gou (hook), Ban (Stumble), Gua (hang).
Thus, Wushu Tuishou is also called civilized Sanshou (free fighting).
The rules for the competition shown on this disk are explained by Zhang Zigui, one of the prominent martial artists, and demonstrated by Wu Shijun and Liu Jun.
Wu is a famous Chinese martial artist, and Liu is one of the champions of China Wushu Championships.
This disk provides the competitors and judges of Tuishou with an excellent learning material which gives a detail account of allowed techniques, prohibited parts, and scoring criteria of the competition.

8.Interlink Fist of Yue-style–Combat Skills of Ba Fan Shou (SXYD11) – 68 min.
It is said that the famous general of the Song Dynasty, Yue Fei trained his soliders by Ba Fan Shou so as to improve their battle effectiveness.
It is compact, practical, easy, and powerful for attack and defense, which including many hand techniques such as Kick, Punch, Tumble, Catch, Bundle, Throw, and so on.
There are three sections — upper, middle, lower, eight routines for each.
The characteristic is practicing movements on both